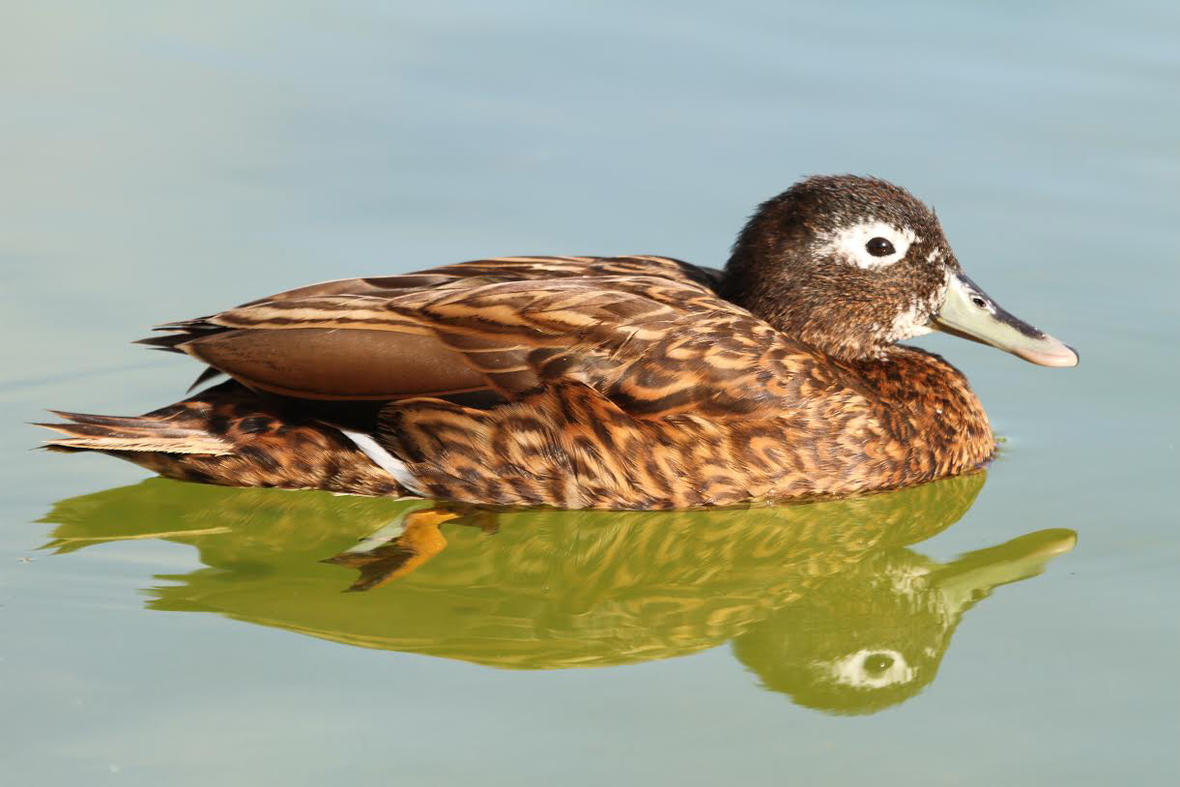 The Laysan duck (Anas laysanensis) is a dabbling duck from the family of water birds that includes ducks, geese, and swans (Anatidae).
This Critically Endangered species is still threatened, due to small populations (500/680 mature birds) and restricted range. It is vulnerable to bad weather, disease, introduced species, both animal and vegetal ones, and degradation of the habitat.

Male:
Male have a slight green iridescence to the dark head, the amount of white around the eye and on the head varies between individuals. Rest of body chestnut mottled with dark brown. Iridescent speculum appears teal green, or blue. Dark green bill.

The Laysan Duck is rarely observed swimming or flying and spends about 10 percent of its time each day walking or running on the ground. During midday the ducks rest and they come out to feed during the evening and night. Vocalizations are similar to that of a mallard but are rarely heard except during courtship. Male ducks fighting for mates are observed pulling at each other's breast feathers.

Laysan ducks (Laysan teal) are easy-going with a friendly personality; they are suitable for mixed collections.The enclosure should contain water, loafing areas and cover.

Laysan ducks (Laysan teal) are easy-going with a friendly personality; they are suitable for mixed collections.The enclosure should contain water, loafing areas and cover.

This duck breeds well in captivity; they normally lay end of April to June, ground-level nest boxes and good close ground cover should be provided for breeding. The ducklings may be parent or hand reared.

Breeding:
The female Laysan duck usually lays from 5-6 greenish-white eggs and incubates them for 26 days.
Bird banding:
Recommended leg band size for the Laysan duck is 9 mm.The leg band can only be applied on a young dabbling duck at around 12-14 days old.
It doesn't matter what leg that you band, but it is good to have a consistent system. Suggested: Left leg = Female, Right leg = Male

Floating full food for all sea ducks, green ducks, eider ducks and geese, especially in the moulting and breeding phase ideally suited. Packed with wholesome raw materials, natural vitamins and trace elements, this performance food with a protein content of 30% forms the basis for lifelong vitality.

Photos of the Laysan duck

Videos of the Laysan duck